After the decision was made to go with the Vortech Centrifugal Supercharger, work began on developing the kit.  The engineers spent hours under the hood of our project G37 Coupe taking measurements, test fitting parts, and checking the tight clearances to see where they could put all of the necessary components.  The new VQ37 has a very unique and challenging dual throttle body intake design.  The STILLEN engineers have had great success with making big power off this design and a perfect example of that are the Generation 3 Intakes which offer up to 18 horsepower!  However, the supercharger was going to require some creative thinking and once again, the engineers have pulled it off! 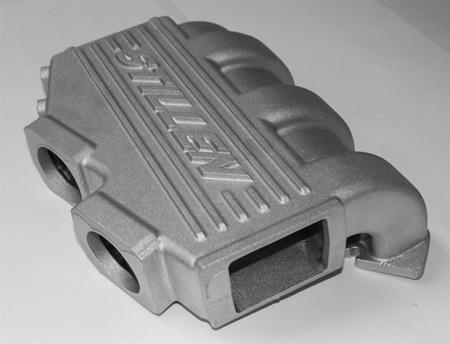 Here are some pictures of the STILLEN-designed intake manifold done with our 3D CAD software, and some of the new aluminum castings just received before final machining:

All of the engineering for this intake manifold has been done in-house.  We began by developing several designs in our 3-Dimensional CAD programs which allow us to test virtual airflow and simulate installation and function on a “virtual engine.”  Once the CAD drawings are completed the engineers “print” out a plastic part on our rapid prototype machine.  This prototype is constructed out of a durable PVC plastic material and allows us to take our virtual work to the real world.  With this prototype we can install the part on the engine to check our fit and finish, we can also use it for mock-up to run the intake piping, bolt up throttle bodies and route serpentine belts and more.  We actually ran the car with this rapid prototype plastic manifold on the car which allowed us to check belt alignment and clearances while the engine was running.

Due to the overwhelming cost, we do not have an aluminum foundry in the back of our shop, so in certain instances like this some of our products have to be outsourced to specialists. These aluminum castings come back to our shop for final machining and finishing before being assembled with the intercoolers and the rest of the kit.

The company who does all of our castings also manufactures parts for some of the largest manufacturers in the industry including:

We are also very proud to say that they are based in the U.S.A. This is very important to STILLEN, as we feel too many companies these days outsource to other countries and we try our best to keep all of our manufacturing in-house or at least in the U.S.A.

First question that usually comes up is:  What is an intercooler, and what does it do?

An intercooler is essentially a radiator that cools the air compressed by a turbo or supercharger.  Air-to-Water and Air-to-Air intercoolers essentially do the same job but go about it in two different ways, each having their pros and cons.  The compression of the air by the supercharger or turbocharger causes the air charge to become superheated.  When the air is heated it loses its density and also becomes less oxygen rich.  An intercoolers function is to lower the intake air temperatures, thus regaining the density of the air and increasing the levels of oxygen in the air charge.  Another benefit to the cooler air charge is the ability to run higher levels of boost, and more aggressive tuning without the concern of combustion anomalies.

Air-to-Water intercoolers are very similar to your cars cooling system.  A water and coolant blend is cooled through a radiator/heat exchanger and is plumbed to the intercooler which is mounted inside the intake manifold.  The compressed and superheated air coming out of the supercharger is blown across an intercooler which is being cooled by the water/coolant blend.  This is where the heat is transferred from the charged air to the intercooler and removed back out to the heat exchanger. This thermal transfer cools the air at the last possible second before entering the engine thus guaranteeing the coolest air charge possible. 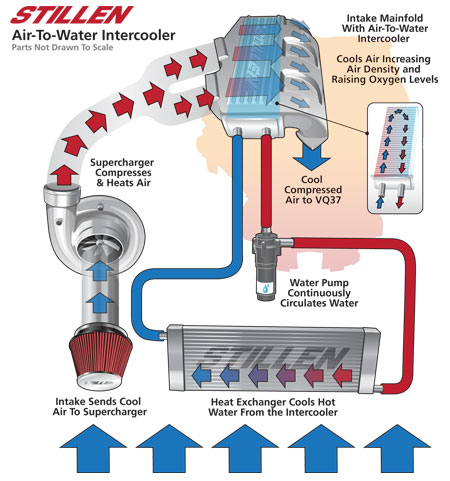 In an Air-to-Air system the superheated compressed air is cooled through the intercooler which is usually mounted up by the front bumper.  The air then has to travel back to the intake manifold through metal tubing.  This tubing is sitting inside the hot engine bay which is being heated by the air coming through various coolers such as, radiator, oil coolers, and also the heat coming off the exhaust manifolds, the engine block and the valve covers.  The intercooler does remove a significant amount of heat but because the air has to travel back through the hot engine bay it is then being reheated before going into the engine.

A distinct advantage to an Air-to-Water intercooler is the condensed packaging.  Air-to-Water intercoolers only require a relatively small heat exchanger in order to work efficiently.  Think about how much outside air is coming through the front of your car.  Now stick a heat exchanger or Air-to-Air intercooler in front of your radiator, oil cooler, transmission cooler, power steering cooler, and intakes.  It quickly becomes clear that a large Air-to-Air intercooler is going to consume a large majority of the cool, fresh air coming in from the outside which also needs to be used to cool other vital components of your vehicle.  Because an Air-to-Water heat exchanger is substantially smaller it does not need to consume as much cool air that can be used by other coolers for the car.

Air-to-Water intercoolers are actively cooling the water inside the cooling system by continually pumping the coolant utilizing an electric water pump.  This means that it is effective and efficient at any speed.  An Air-to-Air intercooler system greatly relies on the vehicle’s speed to generate sufficient airflow around the intercooler.  This means that in real world conditions the Air-to-Air intercooler is not getting any air flowing through it while it pulls heat off of surrounding vehicles and off the road surface itself.  At the same low speed or stop light situation the Air-to-Water system is actively circulating the coolant.

The only downside to an Air-to-Water intercooler system is the cost.  Because there are two coolers, water pump and additional hoses and fittings for the plumbing the cost is a bit higher than just one large air to air intercooler.  However, the performance benefits far outweigh the cost differences in our opinion for this application.