STILLEN founder and owner Steve Millen has again been invited out to the 2010 Toyota Pro/Celebrity Race at the 36th annual Toyota Grand Prix of Long Beach on
April 17, 2010. 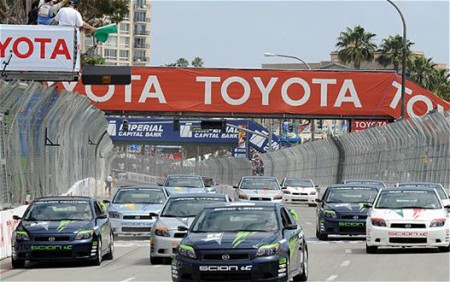 Steve Millen will climb into the Scion tC, pitted against a field of 17 other drivers, from long-time STILLEN friend and comedian Adam Carolla, celebrities such as skateboarding legend Tony Hawk, to other racing stars such as drift and X-Games driver Tanner Foust.

Interesting note.. despite his lifetime racing career, many championship victories at places like LeMans and Daytona, and his recent successes with the Nissan GT-R at Targa Newfoundland, rules are rules, and Steve will be attending a couple of days at a Racing School prior to the event. This will be the first time for Steve to have attended a driving school of any type. (Yes, we’ve had a little fun teasing him about it.. especially about who his instructor might be!)

Steve Millen did participate in the 1986 Toyota Pro/Celebrity Race, making his way to the front, taking the lead before being rammed by a celebrity in a hairpin soon after the pass, taking the Toyota Celica suspension with him, and ending the day for Steve. 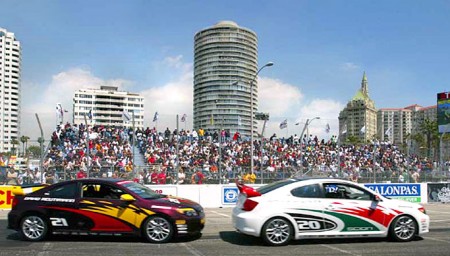 See below for the official Toyota press release, along with the full list of celebrities, pro’s, and other drivers:

LONG BEACH, Calif. (March 11, 2010) – An eclectic group of Hollywood’s stars from film, television, music and sports will put their freshly honed racing skills to the test all in the name of charity on Saturday, April 17 in the Toyota Pro/Celebrity Race, part of the 36th annual Toyota Grand Prix of Long Beach.  The field of drivers will compete in identically-prepared race-ready Scion tCs in what has become the world’s longest-running, most prestigious celebrity racing event.

The historic, 10-lap race for charity on a 1.97-mile street circuit through the downtown streets of Long Beach in Southern California is one of six featured events during race weekend.  This year’s anticipated field of 18 drivers includes the following diverse entertainment and media personalities:

The Southern California Toyota Dealer seat is being filled by Chris Ashworth, Vice President & Partner of Toyota of North Hollywood.  Rounding out the field are charity auction winners Jerry Westlund and Dave Pasant, who each won the opportunity to race in exchange for donations they made in two different charity auctions.

“As the crown jewel of celebrity race events for more than three decades, the Toyota Pro/Celebrity Race continues to attract the most adventurous celebrities and professional racers,” said Les Unger, Toyota’s national motorsports manager.  “Throughout the history of this event we’ve managed to transform our favorite celebrities into high-speed racers, while also changing the lives of children in need.”

Toyota will donate $5,000 to “Racing for Kids” in the name of each celebrity racer, and another $5,000 to the winning racer’s charity of choice.  Racing for Kids is a national non-profit program benefiting children’s hospitals in Long Beach and Orange County, Calif.  On behalf of the race and its participants, Toyota has donated more than $1.8 million to various children’s hospitals since 1991.

Finally, a $15,000 donation is made in conjunction with the 13th annual “PEOPLE Pole Award.”  Sponsored by PEOPLE magazine, the award honors the pole-position winner of the Toyota Pro/Celebrity Race qualifying session on Friday, April 16.

How the Infiniti Q50/Q60 VR30DDTT Cat-Back Exhaust from STILLEN® was Made!