Every year towards the end of October, teams from around the world gather together in Auckland, New Zealand to start the 5 day Dunlop Targa Rally.  The Targa Rally is a grueling test of man and machine that takes place over closed country roads that would normally be open to the public.  The roads get closed down for just a few hours, just long enough to funnel 100+ “rally” cars through.  Competitors arrive in all types of vehicles, from a Ferrari F430 World Challenge race car, a Maserati and a few Porsche GT3 super cars to WRC-prepared Subaru and Mitsubishi rally cars, and even the older classic cars come out in force, like the old Mark 1 Escort’s and even a Datsun 240Z with a supercharged LS2 engine and sequential gearbox.  2010 however was the year of Godzilla. 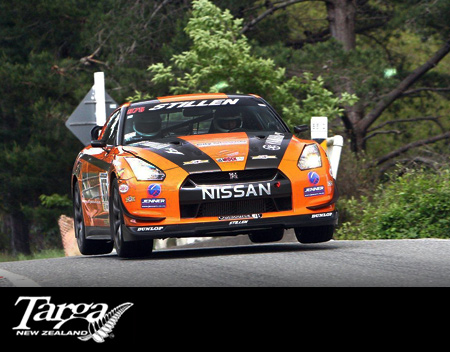 In the 2010 running of the New Zealand Dunlop Targa Rally there were four Nissan R35 GT-R’s competing in the actual race, and one GT-R competing in the Targa “Tour”, an event which takes place on the same closed roads and along the exact same route as the actual rally, the only difference being the Tour drivers are limited to a much lower top speed and do not compete for any sort of winner’s prize.  The four GT-R’s this year were piloted by some of the most experienced Targa Rally competitors, including Tony Quinn.  Tony has won 3 Targa’s now and competes in Australia and New Zealand with his GT-R in numerous different Targa’s each year.  Steve Millen took the STILLEN-prepared GT-R to the event for the first time.  Clark Proctor and Harry Dodson are the local New Zealand drivers and both came out with heavily modified GT-R’s of their own.  The stage was set for a great battle all week long.

Strategy is a big part of these Targa rallies.  When preparing for a Targa rally the key thing to plan on is rain.  Pretty much every Targa NZ Rally sees at least one or two days of rain.  In the 2009 Targa Rally they actually experienced hail and snow on the last day of competition!  In 2008, the organizers had to close the final stage as hurricane force winds were blowing the ocean waves across the road.  The reason rain is so important to the rally is because the competitors are limited to six tires for the entire week, including the four you start with.  This means if you get a blow out or wear out your tires too early, you can only count on two spares.  If you take a seventh tire you get a 3 minute penalty, and for your 8th tire and on, you get a one minute penalty each.  The final stages are run in Wellington, New Zealand, one of the most modern cities in all of New Zealand and is actually the country’s capital.  It is also known as “windy Wellington” as the weather is often adverse.

When preparing for the Targa Rally Steve and the crew analyzed the weather forecasts and it appeared the weather would remain dry for the first couple of days, but would turn towards the end of the week when we got to Wellington.. Perfect!  Just what we wanted to see!  Keeping this in mind Steve took the first day relatively easy, letting Clark Proctor and Tony Quinn battle it out for the lead.  Knowing that the harder they pushed the more tire they were going to be scrubbing, the entire team felt confident in the strategy and were looking forward to the wet days when the other teams had scrubbed off their tread!  Glenn Inkster, a local tarmac rally champion, stuck his nose in the fight with his heavily modified Mitsubishi Evo, but it appeared he wouldn’t have any tires left after watching him drift through turns and slide his car all around the roads.

On day 2 Proctor retired from the rally after sliding off the road and damaging the rear of the car in the second stage.  In the same stage, he also blew the engine and his week was done.  Steve meanwhile decided to pick up the pace and start giving chase.  Applying more pressure to Quinn and Inkster and even setting some fast times for some stages.

As day 3 approached, so did the weather!  The STILLEN team was excited and we knew the times were going to tighten up.  Steve felt even more comfortable with the car as he also noticed the Dunlop tires did not seem to be wearing heavily so he pushed on harder and again, laid down some fast times and won a couple of stages on the day!  A real battle for second place was starting to shape up between Millen and Inkster for second place as they both slowly but steadily began chopping time out of Quinn’s lead.

By the end of day 4 the team was ecstatic!  The car had been working great and the tires were holding up well!  The best news though came at the end of day 4.  Driving down to Wellington you couldn’t help but think about tire strategy as the heavy fog came rolling in and the air got cold.  Quick inspections of Inksters and Quinn’s cars showed nearly no tread left on both cars with plenty to spare on Millen’s!  The team went to bed that night thinking the leaders would either need to take time penalties for new tires or try to drive their cars on essentially slick tires through Wellington’s notoriously harsh weather which would allow Millen the opportunity to make up the time in the rain!  All weather reports were pointing to rain and the team was very excited to wake up in the morning.

The next morning we all jumped out of bed and ran to our windows to open the blinds and hope to see grey skies and rain pouring down.  Shock!  Nothing but clear skies and white clouds!  Could this be the first year that the Targa Rally competed all week on dry roads?  On day 2 there was a 30 minute shower in the morning that lightly dampened the roads but not enough to be considered an impact on performance.  It turned out that yes, this was going to be the first year that the Targa Rally ran dry!  So, Steve knew it was up to him to strap in and do his best to push as hard as he could, even though now Inkster’s and Quinn’s tires were actually better suited to the conditions since they were essentially slicks.  Steve pushed as hard as he could and again managed to set some fast times but was unable to overcome the time deficit.  After a week of hard racing, 2,000+ miles, and over 5 and a half hours of accumulated stage times, Steve finished 3 minutes and 30 seconds behind Tony Quinn and only a minute behind Glenn Inkster.

Overall, it was a fantastic week and the car performed flawlessly!  Steve took advantage of the awesome power and handling of the GT-R and pushed it to the limits.  Unfortunately, the weather did not play into the tire strategy and the result was a 3rd place finish.  Had the weather worked as it normally does on the Targa Rallies, we probably would have won the rally.  With the time penalties the other teams would have taken for tires the strategy may have worked perfectly and the team would be celebrating a win.  However, at the end of the day, the prize is the same.  Targa Rallies were started in Italy and the Italian word “Targa” translates to “plate.”  So, the top three finisher’s receive plates indicating their final position.  There is no prize money, just a great week spent with great people enjoying some amazing cars as you tour through a beautiful country.  Just like most endurance racing, simply finishing every stage is the real prize!