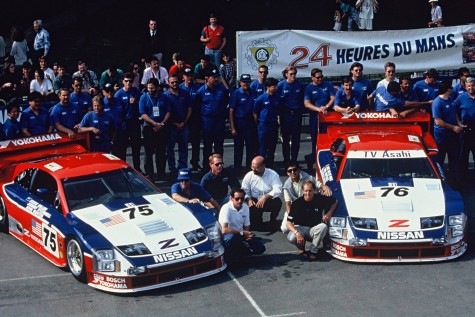 Coming out of retirement and ready to win another race, Steve Millen, No. 75 Nissan 300ZX and the original crew are racing at the 2014 Rolex Monterey Motorsports Reunion in Monterey, CA to celebrate his winning 1994 season. As you can imagine, the STILLEN team is looking forward to be celebrating the anniversary and to see our founder back on the track racing the iconic No. 75 car. There is no one more excited than Steve Millen, who had this to say about the upcoming race, “The past 20 years have flown by like they were 24 hours, so getting back behind the wheel of the No. 75 with the support of many of the original team members will be like stepping into a time machine. People might forget that this car was so dominant in 1994 that IMSA banned its twin-turbo V6 engine. I think we’ve got a great chance to bring it into Victory Lane one more time against some other amazing race cars at Laguna Seca. I can’t wait.”

The sentiment is also shared by Nissan, who will be setting up a display in the Laguna Seca garage area that will support the No. 75 Nissan 300ZX’s return to competition. Additionally, the display will showcase Nissan’s newest sports cars – the Nissan 370Z NISMO and Nissan GT-R NISMO.  As Pierre Loing, Vice President of Product Planning at Nissan North America, Inc. said, “From the original 1994 Le Mans inspection sticker to the twin-turbo V6 and Nissan 5-speed Hewland gearbox, the No. 75 is the real deal and we can’t wait to see it back on the track at speed with Steve Millen at the controls.”

This particular chassis is especially close to Millen’s heart as it is the most successful chassis from the NISSAN IMSA 300ZX campaign. Steve won more races, set more lap records, and pole positions in this particular car than any other car.

*For more information about the racing history of the Nissan No. 75 300ZX and Steve Millen’s racing career, please visit: http://www.stillen.com/racing-i-33.html

As you can imagine, getting the twin-turbo V6 75 car track ready is quite a feat. Steve Millen and technicians from the STILLEN performance shop have been hard at work preparing the car for the race, where it will compete against 550 vehicles at the Monterey Historics this August. Keep up with the action, including vehicle shakedown and practice sessions, by subscribing to the STILLEN blog, following the STILLEN Facebook page and following STILLEN on Instagram. See you on the track!