Home PULLEYS 101: More HP and MPG from a Pulley? 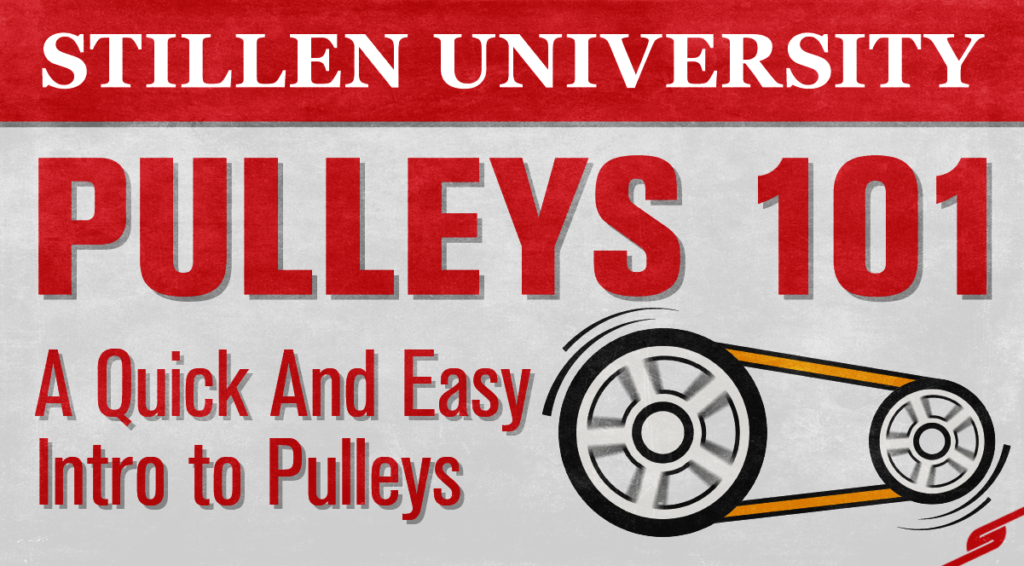 For decades, racers and tuners have always sought ways to extract as much power from an engine as possible. Most of the time adding power is a matter of getting more air and fuel into the engine, but what if there was power there that you could “free up”. Well, there is – and you can reclaim that power with a set of STILLEN Performance Pulleys. If you’ve read our piece on lightweight flywheels, this analogy might sound familiar, because the same physics are at work here. 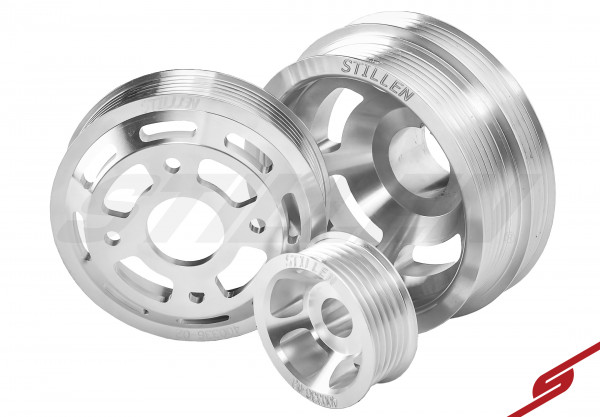 Imagine you’re trying to run, but you’re wearing heavy work boots. You probably can’t run very fast, and it takes effort to start moving or slow down. Your stock crank pulley is kind of like that. It is a heavy pulley designed to drive the accessories, and it’s often weighted for the same reason as your flywheel – it makes operation slightly smoother, but just as often, the pulleys are heavier than they have to be simply because it’s much cheaper to use a heavier material.

Since the OEM pulleys are heavier than they have to be, lightweight pulleys offer an easy way to free up horsepower that’s otherwise lost. A lightweight pulley accomplishes this simply by reducing rotational mass – or in leymans terms, because it weighs less, it takes less horsepower to spin the pulley, so more horsepower gets to the wheels. 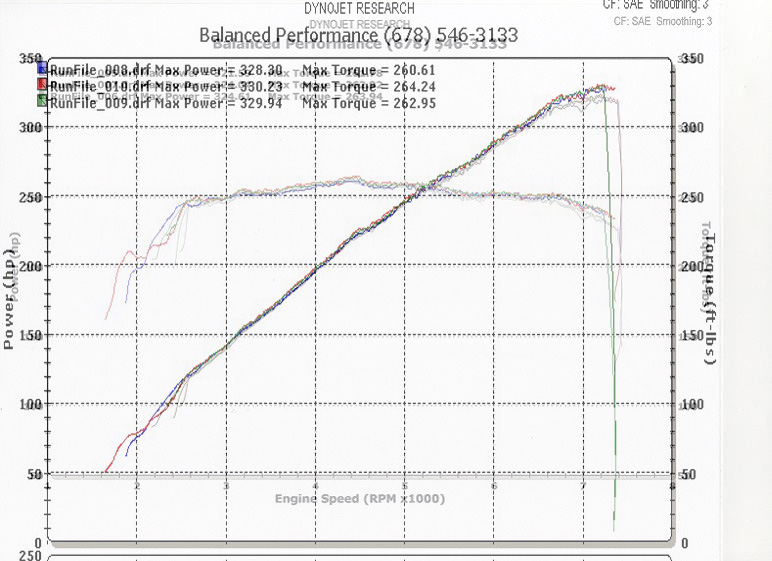 Consider that stock crank pulleys typically weight 4-10 lbs… this varies depending on manufacturer and engine size. As we mentioned earlier, most manufacturers typically make their pulleys in cast iron, which while it is cheap and strong, it’s also heavy, which is why there is some benefit to be had in a lighter weight set of pulleys. 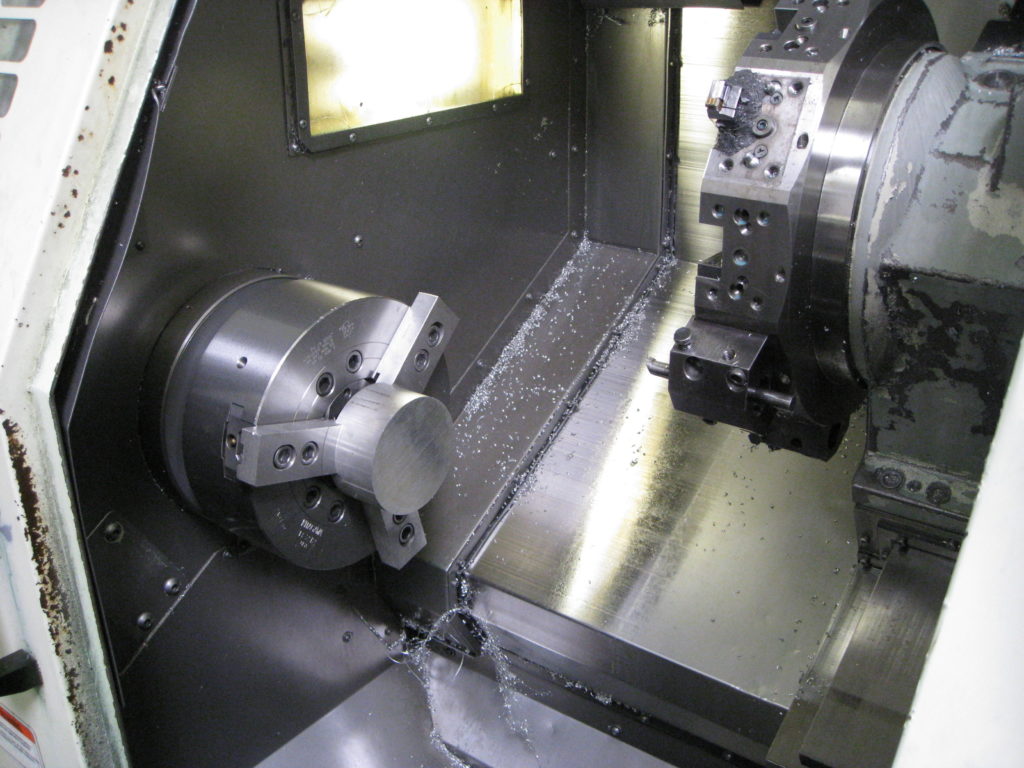 Manufactured completely in house at STILLEN HQ in Costa Mesa, STILLEN Lightweight pulleys are machined from Aerospace grade 6061 billet aluminum and have been engineered to remove all unnecessary mass while still creating a stronger, lighter part than the OEM unit they replace. 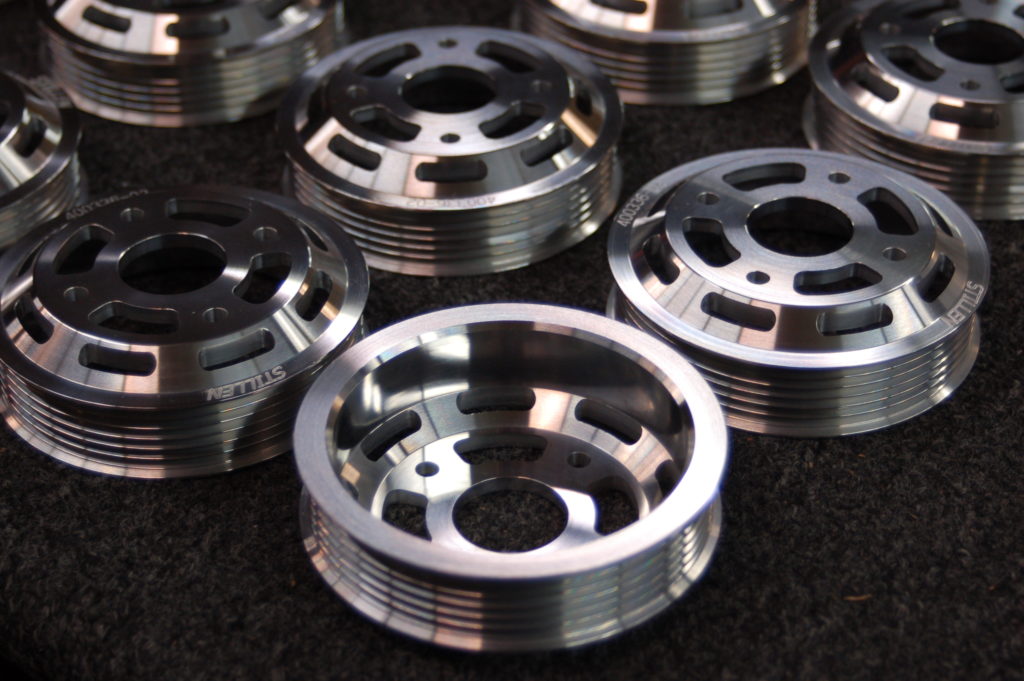 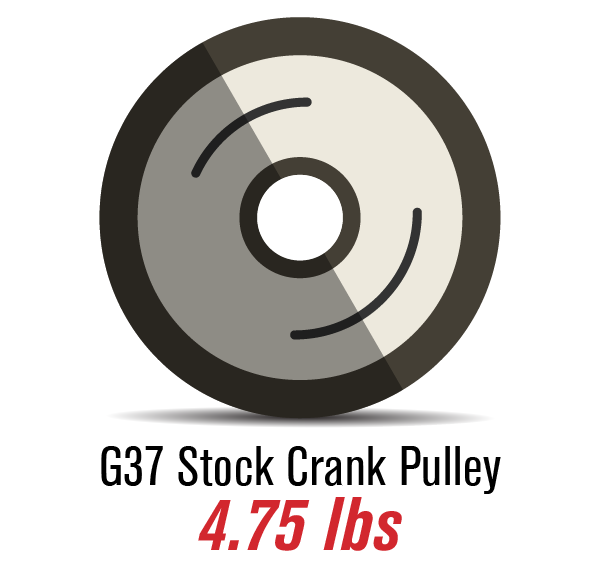 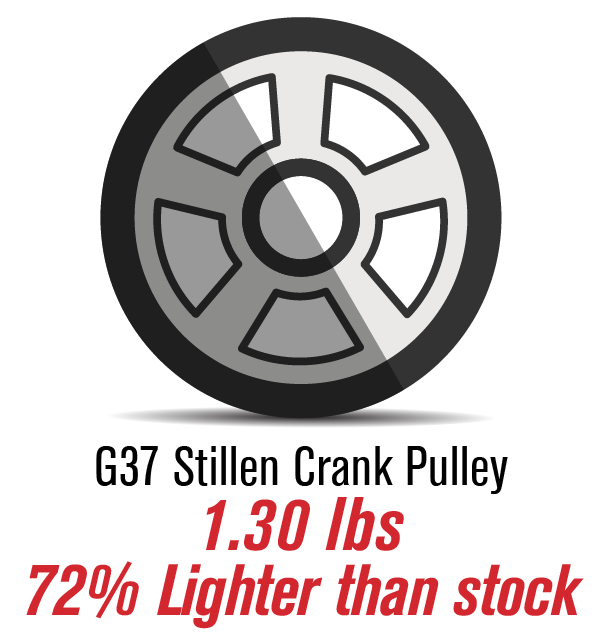 That weight savings of around 3.5 lbs makes a noticeable difference on the motor. Some might say 3.5 lbs isn’t much, but you have to remember that since it is spinning, the physics acting on it make it behave as if it’s many times heavier when it’s in motion. 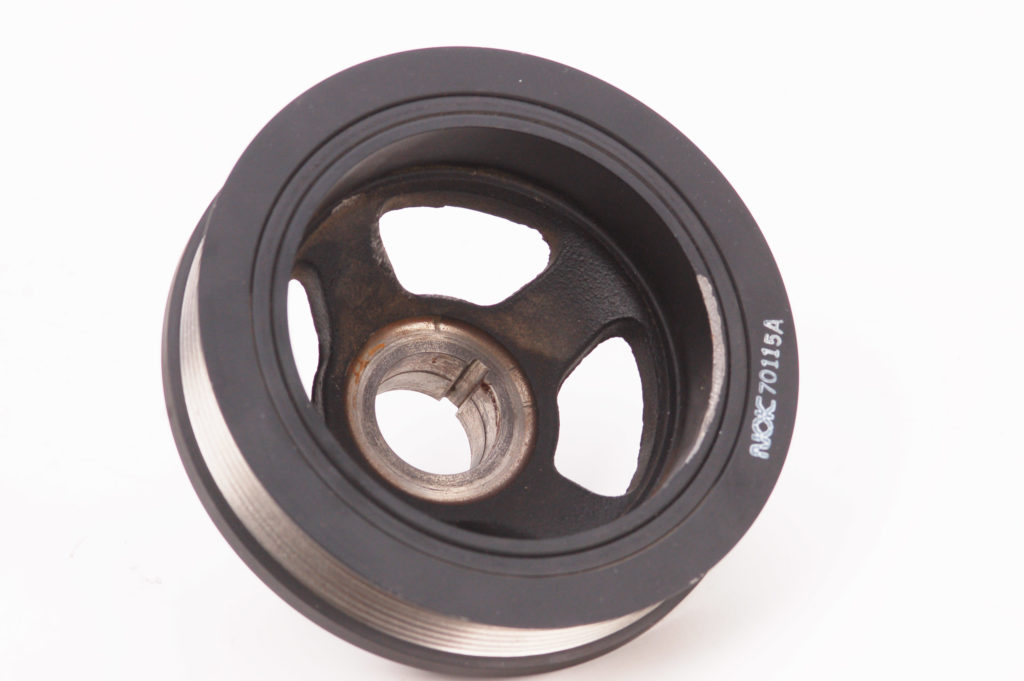 The engine has to spin that extra weight over 1000 times per minute (RPM) at idle alone, which explains why, after upgrading from an OEM pulley to a lightweight pulley, we typically see gains of 5-8 whp. Mind you, these aren’t nonsense numbers like that can be accounted for by dyno variance – there’s no snake oil here, there’s less drag on the engine, thus, more horsepower gets to the wheels. 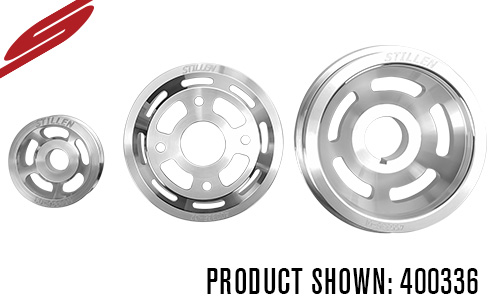 STILLEN Underdrive pulleys have all the same benefits of a lightweight pulley and further decrease the workload of your engine. By decreasing the diameter of the crank pulley by a small percentage, we are able to slow the accessories (power steering pumps, alternator, and/or AC compressor), reducing the load on the engine even further. Underdrive pulleys still operate the accessories within their required operating parameters, but use 10-20% less engine power to turn compared to the stock diameter pulley. The combination of a lighter weight pulley with reduced engine load generally yields results of 10-12 whp.

Just as with a lightweight flywheel, a lightweight or lightweight underdriven set of STILLEN Performance Pulleys will make the car generally feel more lively and responsive and quicker to both gain or drop revs.

As a result of the reduced load on the engine, a set of lightweight pulleys has the additional benefit of being more efficient as well, meaning that you might even see an increase in MPG (if you keep your foot out of it.)

In closing, the TL:DR is that if you are looking for an upgrade that increases power and efficiency (better gas mileage), pulleys might be a great option for you.