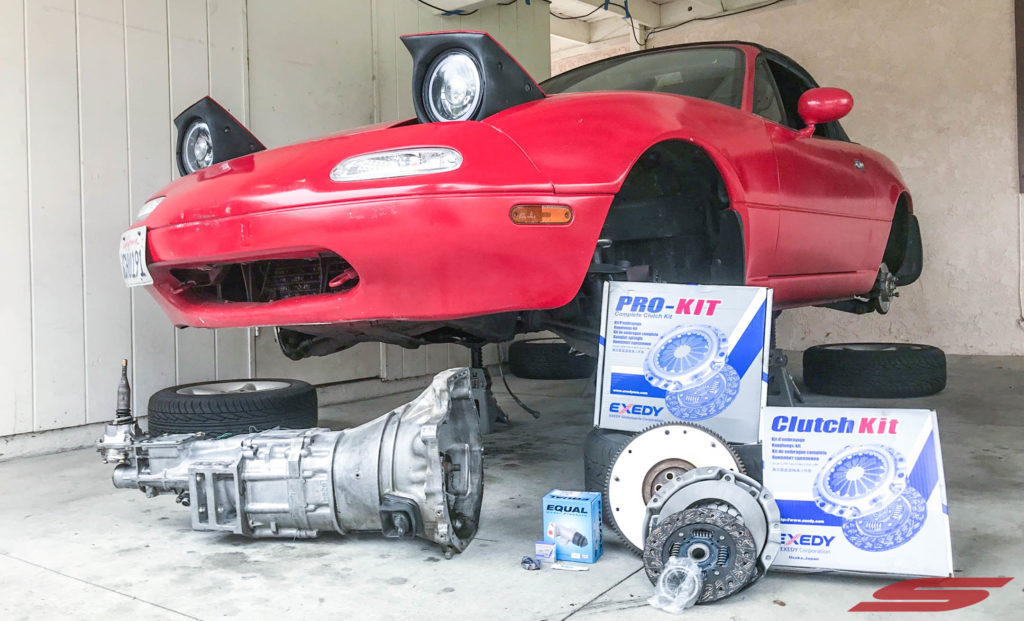 With any manual transmission car, replacing your clutch is simply a fact of life. You may not need to do it til 60k or even 100k, but eventually, you’re going to need to replace your clutch. Much like your brake pads and rotors, your clutch, pressure plate and flywheel are all wear items that will eventually need service.

There are a plethora of reasons to replace your clutch, from basic maintenance to high performance options that can handle more horsepower. Since your clutch is that critical component that connects the power from your engine to the transmission, getting quality components is especially important.

Since we planned on replacing the rear main seal, the clutch had to come out anyways, and after seeing how worn the one we pulled out was, it was the perfect opportunity to replace our Project Miata Clutch for maintenance as well as performance.

Much like STILLEN offer brakes for pretty much any vehicle, we also offer replacement clutches and performance clutches for a massive swath of vehicles. As we announced in December 2017, STILLEN offers Exedy Replacement Clutches, and at great prices, too. 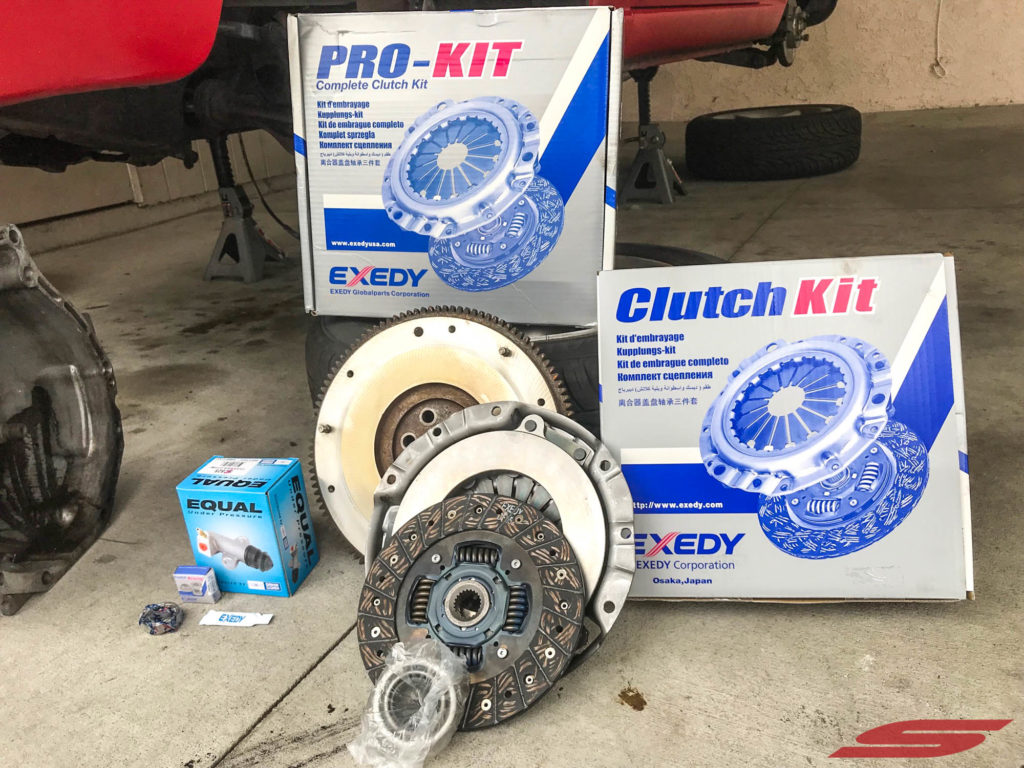 At STILLEN, we’ve long been fans of EXEDY clutches, and proudly offer the full Exedy range. The Japanese are fastidious about quality, and Exedy’s line is no exception. Since a clutch is kind of inconvenient to do, we don’t want to do it again any time soon, so quality parts that will last were especially important. STILLEN also offers several lines of clutches and other options are also available, but we felt this was best for a low-hp car that’s used primarily on the street. Were we going to go the ‘trackday toy’ route, a lightweight flywheel and aggressive clutch would’ve been the plan.

Whereas most Project Miatas are focused on going faster on the track, our goal here was to make the Miata a reliable, solid daily and do what it was designed to do. Be fun to drive on the backroads, top down, on a sunny afternoon. Fun fact, M I A T A is an acronym, standing for Make It A Topless Afternoon.

STILLEN has great prices on Exedy clutches, too. We needed a clutch ASAP for project NA to minimize downtime – to see if we could get it any quicker, we decided to check how much the local part stores were. Well, the local chain auto stores did indeed carry the Exedy clutch, however it was also over $150 more than what STILLEN is offering it for.

For the sake of comfort and streetability, we opted for a Exedy OEM Replacement clutch kit for NA6 Mazda Miata, which is still a grippier material than factory but the material and design allow for enough slip to be comfortable on the street in SoCal stop n go traffic. Mind you, if we were to turbocharge and suddenly were making 300whp, a more aggressive clutch disc would probably be needed, since that’s triple its original output, but since we personally know several such 300whp NA Miatas, it is worth saying.

Our EXEDY Pro-Kit included our clutch disc, pressure plate, pilot bearing and throwout bearing. We needed a few other bits and pieces, though. When we removed the transmission, the OEM slave fell apart, so we replaced it with a new Slave Cylinder, distributed by Daikin, Exedy’s parent company. 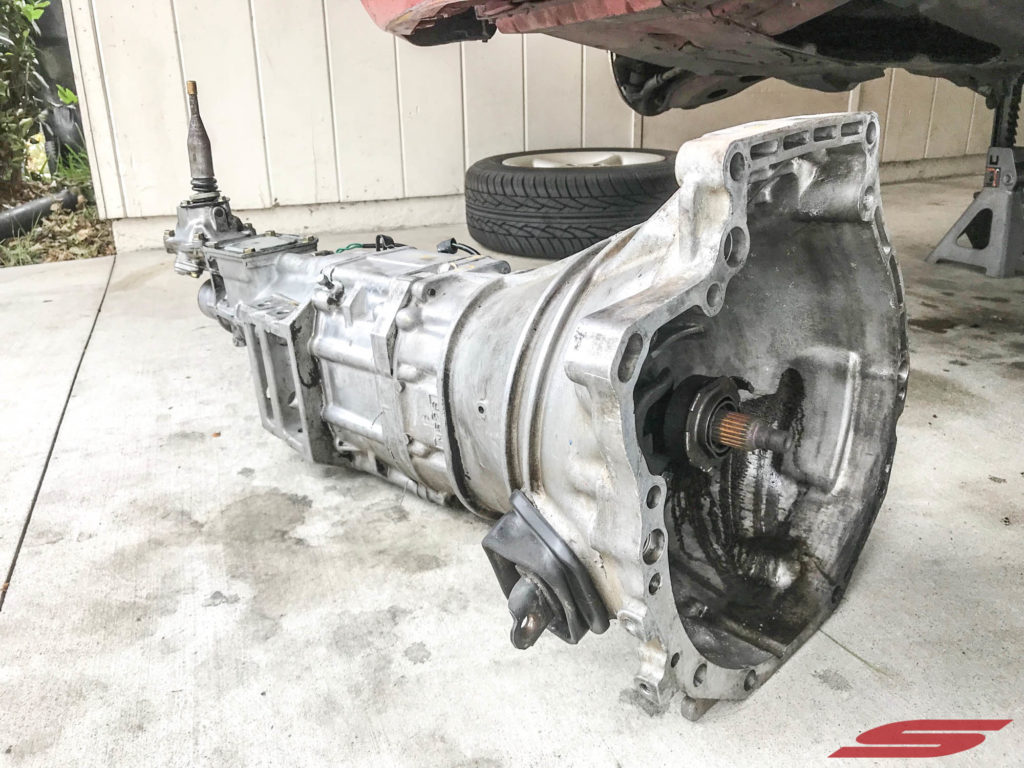 When choosing a clutch, there are often several options – typically “street” and a “Race”. A RACE clutch is great if you make a lot of horsepower and plan to track the car all the time- but for streetability, it’s important to consider the material and intended use of that clutch. The thing is, racing clutch is going to either be ON or OFF, without a lot of slip, so you can’t feather it. Sure, it’ll hold tons of power, but it’ll also stall out more easily from a stop if your clutch/gas balance isn’t JUUUST right.

The wonderful thing about the NA – and the Miata in general, really, is that they’re such a breeze to work on that even most amateurs can figure it out. Your author has been through a number of transmission replacement jobs on a variety of vehicles, and the ease of working on an NA was a pleasant surprise.

The Miata’s transmission drops out in about an hour and change, making this quite possibly the simplest clutch replacement we’ve ever seen.

When working on the Miata, the most commonly used sizes were 10, 12, 14!!, 17 and 19mm ratchets, and with the use of a flex joint and several long extensions, we were easily able to get at every one of the bolts holding the trans in the car. The transmission itself only weighs 60-70lbs (we didn’t weigh it, but it took about the same effort as picking up our 70lb dog). While most Japanese cars will have you looking for the 10mm, for this job, we found ourselves hunting for the 14mm most often. 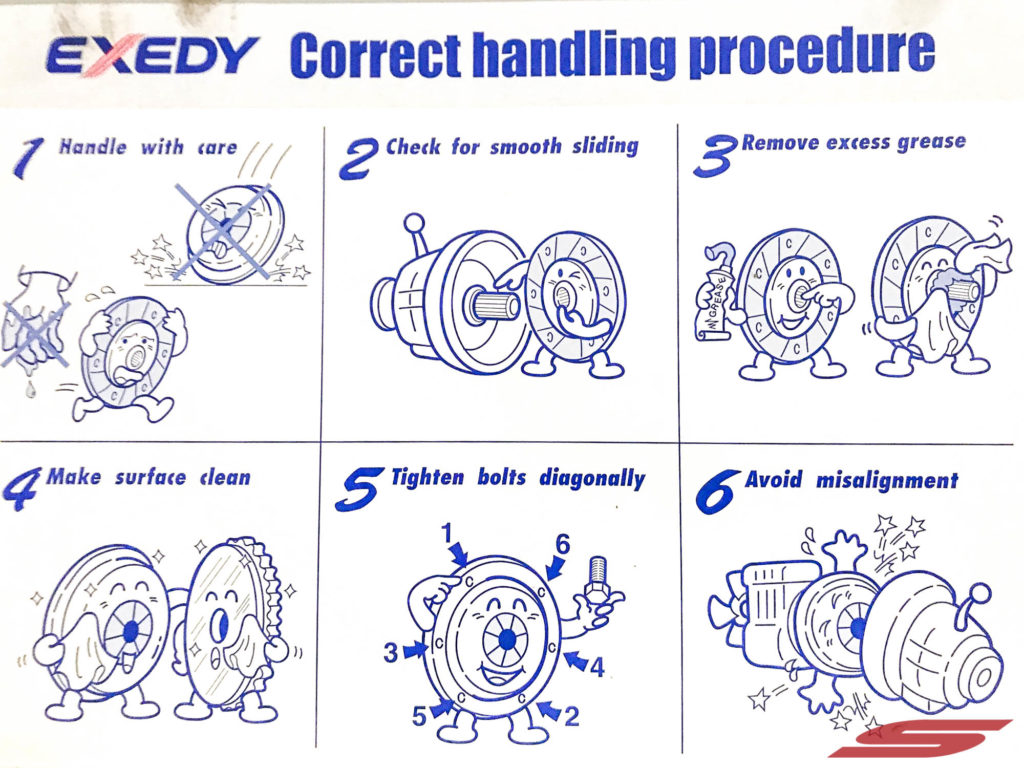 In true Japanese fashion, Exedy’s FAQ includes a cute, cartoonified clutch and flywheel. As you probably already knew, dropping your clutch or getting it wet isn’t a good idea. We didn’t even know you could draw a cartoon clutch, and we have to admit, the subtle ‘mating the clutch’ gag is hilarious.

As silly as it is, it covers the important points – be sure your flywheel has been machined and your parts are clean. We suppose the silliness of it catches your attention, and gets helpful key points across, so job well done to whoever thought that up. 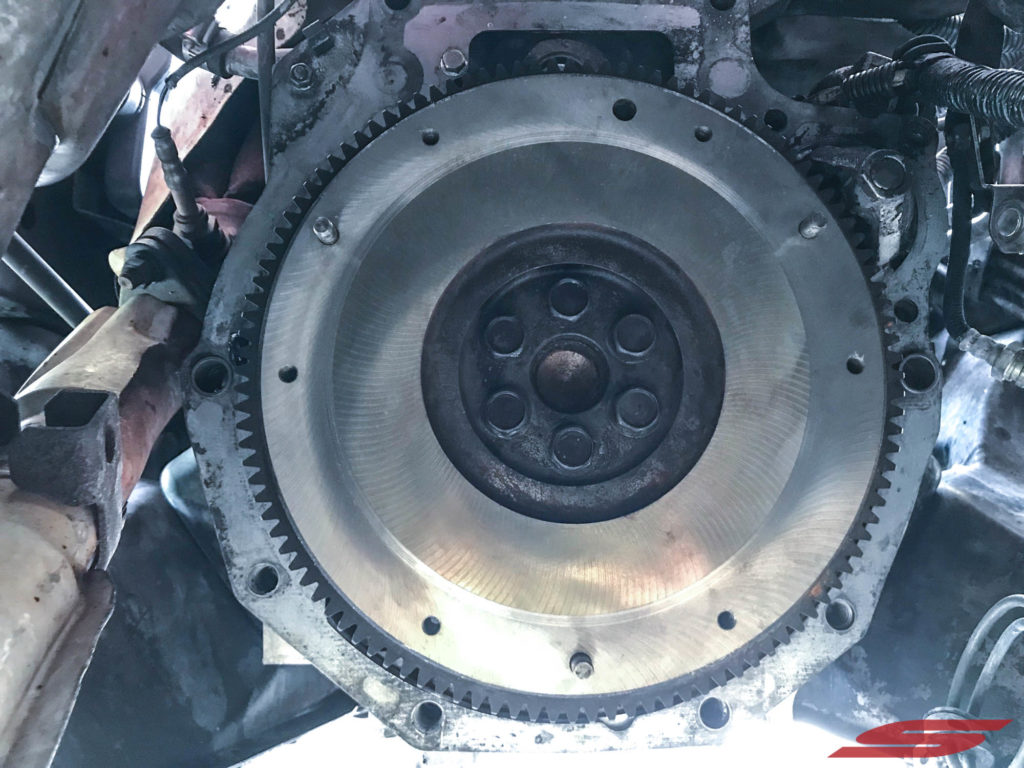 We covered this in our post about the benefit of a lightweight performance flywheel here. 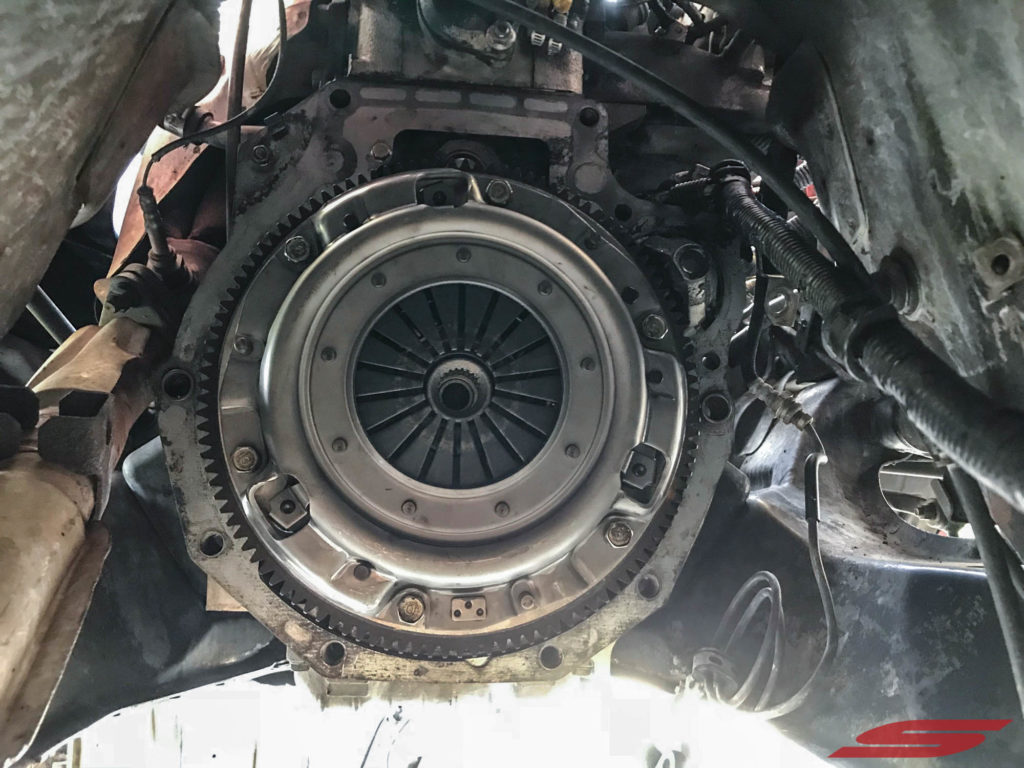 Here’s how everything looks all put together – first the flywheel, then the pilot bearing is dead center, then the clutch disc, then the flywheel. Like the EXEDY cartoon says, tighten the bolts in a diagonal fashion, being sure to use a torque wrench to check that you’ve tightened the flywheel bolts and the pressure plate bolts to the correct spec.

The most difficult part of the whole job was getting the transmission back into the car, as the trans needs to go up a good ways so you can slide the splines in straight-on. 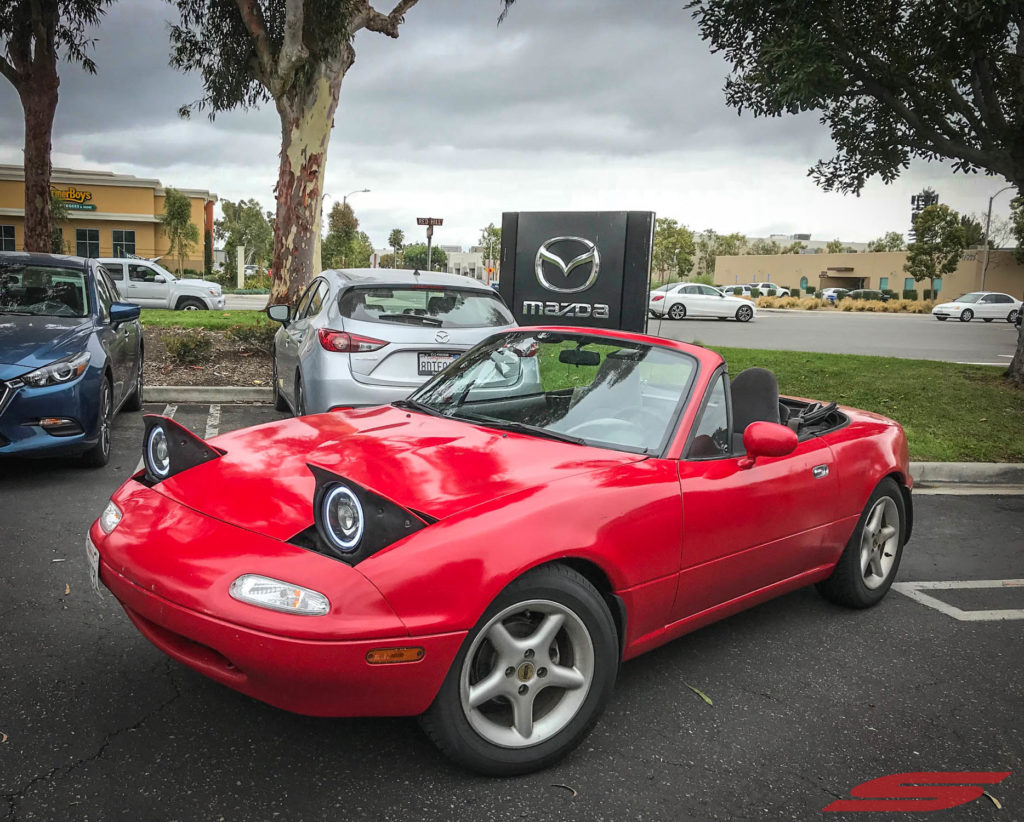 With the new EXEDY Clutch installed, the Miata’s gear engagement is fantastic, and low-speed driving is much easier than it was with the worn out one we removed, and it may be placebo effect, but it does feel like more power gets to the ground – though the word ‘power’ hardly feels appropriate for an engine that made 117HP at the crank when it was new 150,000 mile ago.

If you don’t know when the last time your clutch was done, and you have more than 60,000 miles, it might be time to consider replacing yours.

With the brakes, clutch and tires all brand new, our Project NA Miata commuter is ready for whatever type of driving we throw at it, from commuting here to slicing through the backroads of the foothills for many thousands of miles to come. 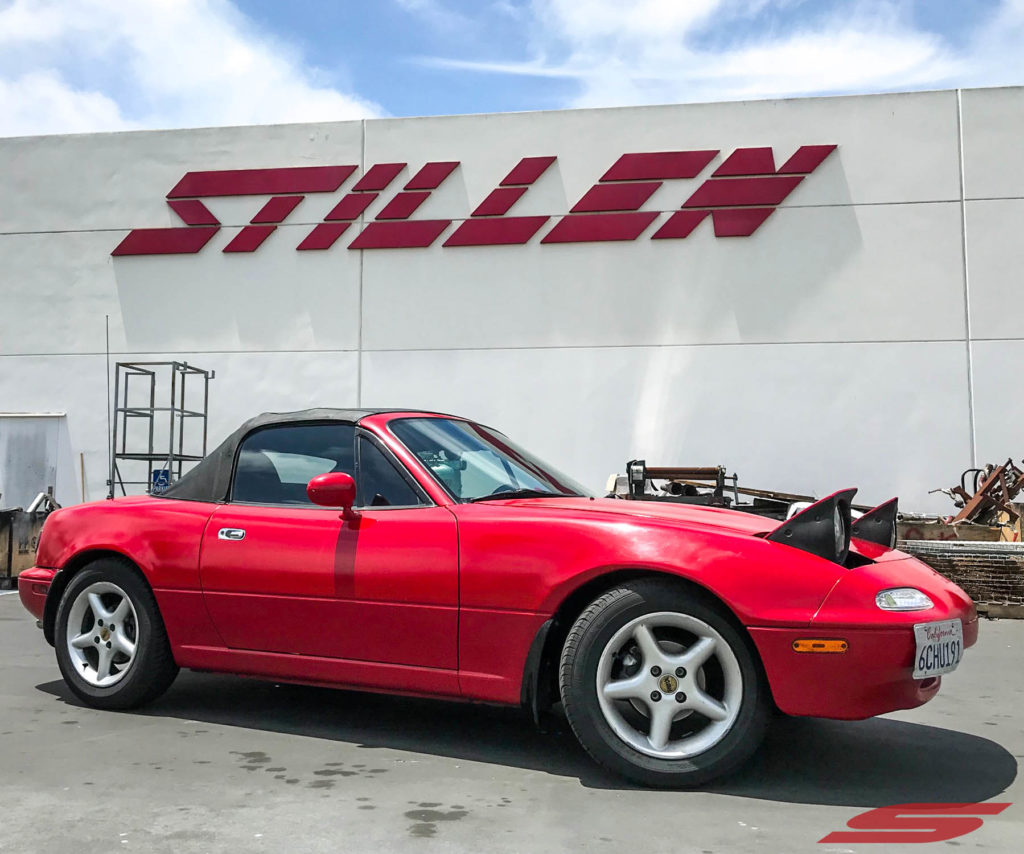 Call today to see what we have for your vehicle. Dial 1-888-250-5542, chat live at STILLEN.com or just stop by the showroom any time during business hours.

Thanks for reading, see you next time!